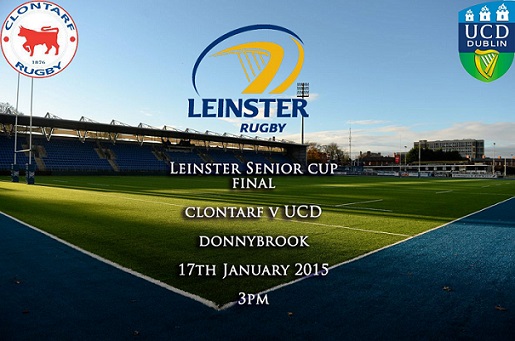 Next Saturday will be the club’s first Leinster Senior Cup Final since 2009.  We are calling on all supporters to make every effort to travel to Donnybrook and get behind the team.  On numerous occasions we have seen that it is the Clontarf support that makes the difference. The nature of this fixture and the venue, make this match all the more challenging and we look forward to seeing as many of you as possible in Donnybrook.

It is a double header with the Leinster Senior Shield Final between Greystones and Wanderers kicking off at 1pm, followed by the Leinster Senior Cup Final at 3pm. Being well placed in the league at the moment after some strong wins against Dublin rivals St. Mary’s and Old Belvedere in recent weeks, we will be looking to carry this form into the final. UCD are also in good form as of late, and with several Leinster Academy players in their ranks, it looks set to be a tight contest between two strong sides.

The last time Clontarf won the cup was back in 2008 when we beat St. Mary’s 9-6, under the captaincy that day of long standing club man, Simon Crawford.  With your support next Saturday, we can do it again!