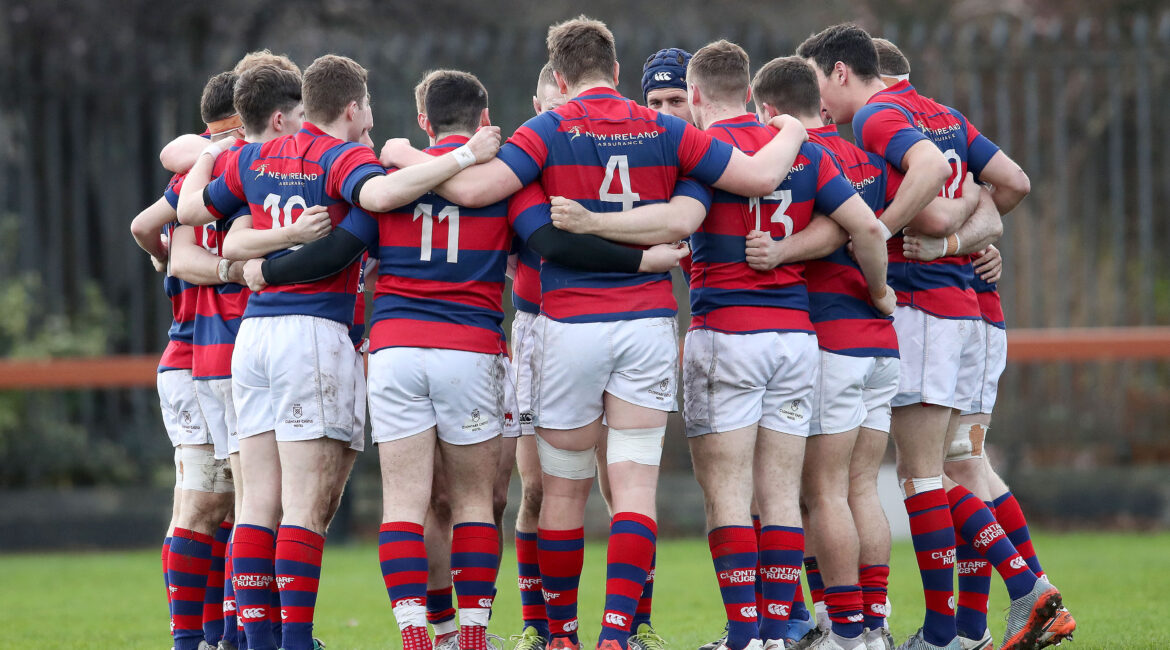 What better way to clear the sinuses than the prospect of a trip to Tom Clifford Park for the opening game in the Energia All Ireland League.

True to expectations and tradition the weather was; the usual – wet and blustery, and the opposition was; the usual – dark and overcast. Young Munster have a front five that nightmares are made of … large and larger!

So with the weather threatening , Young Munster glowering, and the local support fully prepared to give the referee an afternoon similar in tone to what Boris Johnson might expect from a Sinn Fein conference we gritted our teeth (tooth where appropriate) and prepared for combat.

The first half was literally, a half of two halves; Clontarf pinned the home team in their own half for the first 20 minutes and were unlucky to remain scoreless for that period. Had possession and intent been blended with composure Clontarf would surely have reaped the reward they deserved from their total dominance of the first quarter.

Given the weather, defences held the upper hand and when Munsters finally lifted the siege with a scrum penalty and worked their way to the Tarf 22 to apply pressure of their own, Clontarf were asked the questions and on every occasion came up with the correct answer.

So the first half ended scoreless, but not lacking in the kind of tension that these battles bring.

The game loosened up in the second half and the home team continued where they had left off and maintained their dominance which yielded two penalties to their debutante Out-Half Evan Cusack and a 6-point lead.

Clontarf stuck to their task and when Young Munster’s composure started to crack and the referee started to lose patience – two yellow cards to the home side tilted the territorial battle towards Clontarf.

With less than 10 minutes to go, Clontarf won a penalty line out in the opposition 22and worked their way to set up a pick and jam under the home posts. New boy Tadhg McElroy was on hand to burrow over for the score which was converted by another new siging Sean Kearns to give the Bulls a one point lead.

With time running out the home side struggled to move play to within penalty distance and as frustration set in Clontarf managed the endgame at the home 22.

To start with a win in Young Munster is a great start.

Congratulations to all our new players, scorers mentioned above, JP Phelan and out-half Gearoid Lyons who managed a tricky return to home turf, to one of last year’s U20s Fiachra Smith in the centre who dealt with everything thrown at him, to Seni Reilly Ashiru who was a whisper away from going full length, to Valentine Tauamiti who threw everything he had into the fray and to current U20 Darragh Bolger who was granite in the scrum.

Special shout out to Dylan Donnellan who finished the game on the flank, to Ruadhan Byron who finished in the second row, and to Tom Ryan who played the last 15 minutes carrying an ice bag around with him (without any gin !).

Yes … it was that type of game!